A little while back I wrote about an aerobic oxidation which was greatly improved by switching from a traditional round bottom flask setup to a continuous flow reactor – basically, continuous flow reactors are much better at handling oxygen, especially on scale.  But most of the advantages of the flow reactor were specific to that reaction, and it wasn’t clear to me how a flow process would improve a reaction that doesn’t use oxygen, or some other gas.  Fortunately, a lot has been published since then to help me get a handle on how continuous flow reactions can contribute towards greener processes.  In particular, this review covers continuous processing within a green chemistry context, and Organic Process Research and Developement has a continuous flow themed issue in their ASAP section, including this process-oriented review (speaking of OPRD, check out this recent editorial concerning solvent selection and green chemistry).  It turns out that flow chemistry can improve processes in a bunch of different ways, and it’s hard to get a sense for how this can work by just looking at one reaction.  So I’ll cover a few different reactions that illustrate different green aspects of continuous flow reactors.

One benefit of flow reactors is improved control over reaction temperature, due to reduced reaction volume at a given time, higher surface area, and the movement of the reaction mixture.  This is particularly helpful for very exothermic reactions, which often require cryogenic cooling to prevent runaway reactions – this type of cooling is very expensive and resource-intensive on a large scale.  One such reaction is described in a recent paper from AstraZeneca, in which a phosphinate anion adds into a glycine derivative.  The product of this reaction is an intermediate in the synthesis of a gastroesophageal reflux inhibitor drug candidate called AZD6906. 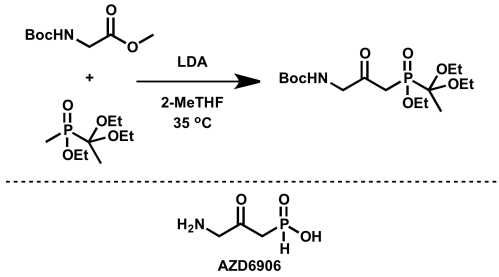 When the reaction was conducted in a batch reactor (equivalent of a large round bottom flask), the reaction had to be conducted at -78 °C to prevent side reactions, and two equivalents of the phosphinate anion were used because one equivalent was consumed by deprotonating the more acidic product.  The extra equivalent of phosphinate had to be separated by chromatography.  By conducting this reaction in a flow reactor, they were able to use one equivalent of the phosphinate (although they did use excess LDA to keep the phosphinate deprotonated)  and conduct the reaction at a slightly elevated temperature instead of -78 °C. What’s interesting is that they didn’t get more side products by conducting the reaction at higher temperature – the authors attribute this to the short reaction time, which is immediately followed by quenching.  I think it’s not just that the flow reactor dissipates heat better, but that it eliminates the local extremes in temperature and concentration that you get in a large batch reactor.  So if you have a hot spot in a reactor, the desired reaction will be complete and a slower side reaction could begin, while in a cold spot in the reactor the desired reaction hasn’t finished yet.  Even though the flow reactor is at a higher temperature, the temperature control is better, so the side reactions don’t have a chance to get started before the reaction is quenched.  Hand-wavey explanations aside, they were able to reduce the energy requirements for this reaction by replacing the original cryogenic conditions with mild heating, and the product was sufficiently clean that no purification was necessary.

The second case is the oxidative photochemical conversion of dihydroartemisinic acid into artemisinin.  Amy just wrote about an efficient semi-synthetic approach to dihydroartemisinic acid, so this is the final necessary transformation to make semi-synthetic artemisinin.  The first step in this sequence is the Ene reaction of dihydroartemisinic acid with photochemically-generated singlet oxygen to form an allylic hydroperoxide.  The acid-catalyzed Hock rearrangement  forms a transient enol, which reacts with triplet oxygen to form another hydroperoxide.  Artemisinin is formed through an acid-catalyzed series of acetal closures and a final condensation.

The problem is that existing methods are pretty lousy – this two step method proceeds in 17% yield, requires cryogenic temperature, and takes four days to complete.  Higher yields (34%) are obtained in this three-step conversion of a similar molecule, but each intermediate is isolated and purified along the way, generating extra waste.  Another problem is that photochemical reactions are difficult to scale up because light doesn’t penetrate well in large reactors.  This, in addition to problems associated with using oxygen, is why the Seeberger lab chose to develop a continuous flow process for this transformation.  Their setup actually sounds pretty simple – they pump their oxygen-pressurized reaction mixture through clear FEP tubing, which is wrapped around a water-jacketed mercury lamp.  They didn’t include a picture in their paper, but it sounds similar to this one that I found in a different paper, which uses blue LEDs inside a reflux condenser as the light source.

Passage through the photoreactor gives them the first hydroperoxide intermediate, and treatment of that intermediate with trifluoroacetic acid and oxygen under thermal conditions produces artemisinin.  Both of these steps were optimized individually, and then they put the two processes together into a single flow reactor:  first the reactant, triplet sensitizer (tetraphenylporphyrin), and oxygen are pumped through the photoreactor at room temperature.  Second, TFA is introduced to the reaction flow, which is fed into another reactor at 60 °C, where the Hock rearrangement, the second reaction with oxygen, and the final rearrangements occur.  The yield for the entire process is 39%, and their setup can produce 200 mg of artemisinin per day.  Compared to the older methods, this reaction is higher yielding, has fewer purification steps, and doesn’t require cryogenic cooling – big improvement.  Flow chemistry is easier to scale up than batch processes, so hopefully this work, combined with the semi-synthesis of dihydroartemisinic acid, represents a reasonable starting point for artemisinin production.  One disappointing detail of this work is that their reaction solvent is dichloromethane, which was necessary for the photochemistry to reduce the risk of fire, and was identified as the optimal solvent for the thermal reaction as well.  Given these constraints, I suppose it’s lucky that they weren’t forced to switch solvents, but there is always room for improvement.

The final reaction is a simple Grignard addition to a thioxanthone, forming an intermediate in the synthesis of the antipsychotic drug zuclopenthixol.  The authors had already figured out a continuous flow version of this reaction, and in their process optimization they discovered that impurities formed when excess Grignard reagent was present.

If I was running this reaction I would simply use excess thioxanthone, but the authors didn’t want to take that hit in mass efficiency, so instead their aim in this recent paper was to achieve a 1:1 stoichiometry as accurately as possible.  They achieved this by monitoring the reaction by inline NIR spectroscopy, which provides nearly real-time analysis of the reaction components.  Engineering this inline monitoring took a lot of calibration and validation that I didn’t really follow, but the upshot is that they were able to detect any excess reactant (either the Grignard or the thioxanthone) at the end of the flow reactor, and use that real-time feedback to adjust the flow rates until they were optimal.  This type of self-regulation allows the reactor to adjust to different concentrations of the Grignard reagent, which typically vary from batch to batch.  It wasn’t really made clear if their yield or product purity were improved by the continuous monitoring (a lot of work for nothing if it didn’t), but I thought it was a cool paper nonetheless.

Ok, so lots of flow chemistry, and lots of reaction-specific ways that it can improve a process. Two things stuck out to me: that flow chemistry is really nice for handling reagents that don’t diffuse well through large volumes (light and gases), and that flow reactors are good at minimizing local changes in certain conditions (temperature, concentration) that lead to side reactions.  I’d be interested to know whether there are some situations where a batch reactor would be preferred to a flow reactor – none are mentioned in anything that I read.  In any case, flow chemistry seems to be getting more popular every day, and I’m sure there will be many more green continuous flow processes developed in the near future.

By tmckeagberkeleyedu in Engineering, Synthesis on April 18, 2012.
← High-Yielding Semi-Synthesis of an Artemisinin Precursor Benign By Design: Synthetic Guidelines for Low Chronic Aquatic Toxicity →